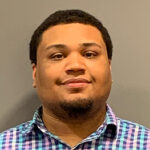 In August of 2020, Rondell joined the Waldron Rand Team. He chose accounting because it was among some of the first college courses he took, and he found he had an aptitude for it and enjoyed it. Rondell is the second of four kids, with one older brother and two younger sisters. He loves it when it’s sunny outside, likes Formula 1 racing, and is a Celtics fan – one place he is happiest is at the TD Garden. His favorite part of his job is the people he works with. At Waldron Rand, Rondell focuses on Assurance services as well as accounting.